But the brain doesn’t like uncertainty. It always goes back to the reference point of what was successful in the past. In light of recent events in the world, I think, as men, we must look at, not only what patterns we have used before which may be outdated, but also how we define success.

As a health expert, rightly or wrongly, I feel a desire to reveal some ideas to the larger community. With regards to what is happening I feel reluctantly compelled to say something from my own first hand experience, and also from my observations. As someone who has the privilege to hear conversations among men, and also in groups, which are predominantly women, I feel my position may be somewhat unique.

Yet as a forty-something heterosexual man, I am also just asking myself: How do I make sense of this environment as a man in 2018?

As a disclaimer, I’ve never been in any position of privilege or ease, and maybe my thought processes and behaviour would have been different if that were the case. I hope and pray that it wouldn’t be, but there is always the possibility.

Growing up in a situation which was survival challenged, it was hard to expand the bandwidth or consider alternative ideas or behaviours beyond observed social and cultural conditions. There is no specific ritual that transitions boys from adolescence into manhood, and often what we lack in resources in that adolescent time becomes a driving force in adulthood, as we continue to try to prove our worth and whatever is our standard of masculinity.

Men are generally assigned status—at least amongst ourselves—based on three basic categories: financial success, sexual prowess, and physicality or athleticism. The dominant male institution is designed to prove your toughness rather than to find your own voice and be resolute in your own convictions.

Further to these limiting beliefs is a disturbing trend in which we seem to be looking to politicians and celebrities as some sort of barometer for normal, acceptable behaviour—whether scrutinizing or idolizing what we see.

While I don’t think we need to expand upon why to not use politicians as our moral compass, there are some media portrayals of men that are quite standard, and can shape both boys’ and men’s perspective on what is expected or tolerated.

There tends to be four archetypes of men presented through the media:

All these archetypes fit a certain stereotype of men—in their masculine portrayal and in their relationship with women. And, as we all relate or aspire to some version of them, these can become ‘identity traps’ for the accepted, or even desired, notion of what men ‘should’ be.

We must be aware of our own identity traps. In order for psychological transformation to take place, we have to be aware of our masculinity threats. I have heard it said that manhood is a hard thing to learn, yet is quite easy to lose. We tend to devolve whenever rejection occurs, as threat is perceived to the fragility of that identity.

One part of the discussion regarding Brett Kavanaugh involves how men are conditioned to impress other men, and this establishment of hierarchy can, at times, derail who we really are. Where such conditioning in the brain and the environment intersect, we establish what is normalized behaviour; yet we still must have accountability and courage to know what is right and wrong.

While I think most men can recall instances where we may have been guilty of some stupidity or indiscretions, I believe the true expression of masculinity is to be as realistic and pragmatic as you can be in facing the challenges—both in responding and evolving. For that change to occur, it is time for us to stop directing our focus just on categorizing what we perceive to be a discretion towards women, rather seeing it from a larger perspective.

We have the opportunity to innovate the modern version of masculinity in a way that is healthier for everyone. These times are sparking us to do so and, rather than see it as what we are losing, we can focus on what we can create. From that spark we can use the strengths of the masculine in developing clear steps and strategies to start something great.

I can’t say as I even know how to accurately define feminism, but I think we can learn from women in how they are more likely to collaborate, innovate, and adapt versus the more traditional tendency of men to simply walk away or close off.

Innovation requires encouragement, collaboration, and communication to keep that spark going. Genetically and epigenetically we have this adaptive potential to change. As men, we can be better with expressing our needs and our fears with an emotional nuance which may resonate better with women and, ultimately, allow us to navigate our own internal and external environments more effectively.

Perhaps the boldest thing we can do right now is to start the conversation. 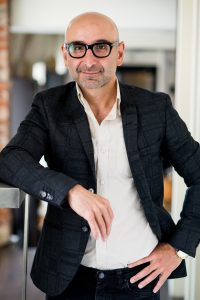