What Does Advil Have to do With Infertility? 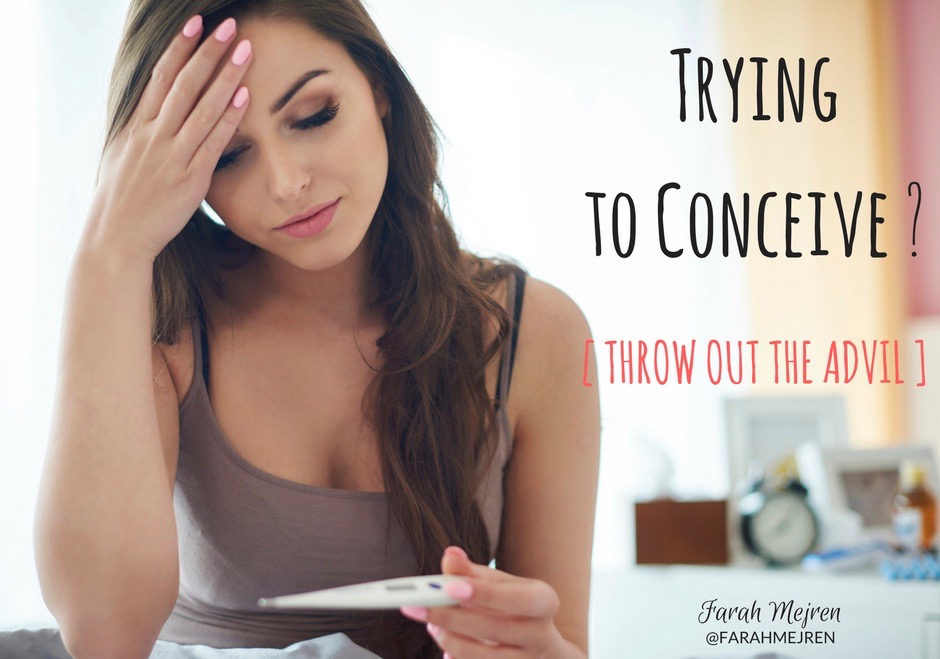 Trying to Conceive? Your Advil might be Ruining your Chances

Ovulation is one of the most important events in conception. With many couples struggling to with infertility, eliminating all barriers to conception should be at the forefront of any fertility plan. This includes anything that could impede ovulation.

Infertility is a growing concern among Canadians – its prevalence doubling since the 80?s, currently affecting 1 in 6 Canadians (1). There are many reasons for why this may be the case. The most obvious – many women are choosing to delay child-bearing, in pursuit of educational, occupational and/or personal goals. In fact, women aged  30 to 34 years are now having more children than any other age group (2). But, according to population studies, a woman’s fertility starts to significantly decline by the age of 35.

Image from the Society of Obstetrics and Gynaecologists of Canada

Outside of chronological age, other risk factors that effect fertility include:

Often, health care providers will ask women trying to conceive many, specific, health-related questions to assess their risks from the list above, but often, Non-Steroidal Anti-Inflammatory Drug (NSAID) use is left out.

NSAIDs can Impair Your Fertility

NSAIDs include over-the-counter medications such as:

They are among the most commonly prescribed class of drugs in Canada, and are frequently used by women of reproductive age. Although the potential for NSAIDs to interfere with ovulation was first documented in the medical literature 2 decades ago, it has received little attention since then (3). However, newer research has now confirmed preliminary data. In a randomized controlled trial, NSAID use was found to prevent ovulation in as many as 75% of fertile women (4).

Most NSAIDs are non-selective COX-1 and COX-2 enzyme inhibitors, inhibiting the formation of prostaglandins (PGs). Prostaglandins play a central role in the inflammatory process, which is why inhibiting these lipid compounds can have such a profound effect on pain.

The good news is that ovulation returns to normal the following cycle, once NSAID use is discontinued.

If you’re trying to conceive, speak to your Naturopathic Doctor about alternatives to NSAIDs for pain management, as they could be delaying or preventing your ability to conceive.

Instead of suppressing symptoms, I work with patients to discover the root cause of their pain, so that they don’t develop dependance or tolerance to pain medication. Until we get to the root cause of your pain, there are many things we can use in it’s place, like: acupuncture, supplements, and herbal tinctures or teas. Often, these evidence-based alternatives have been found to be as effective, if not more effective, than their pharmacological counterparts.

Fertility is a passion of mine, and has been a clinical focus of mine during my fourth year internship. I’m currently on the fertility focus shift at the Robert Schad Naturopathic College, where I help couples achieve a healthy pregnancy and carry that pregnancy to term. If you are currently having difficulty becoming pregnant, there is strong evidence for the use of Naturopathic Medicine to improve pregnancy rates.

It takes 100 days for both an egg and sperm to fully mature. If you’re ready to start planning a family, let’s work together to optimize your fertility.

Farah is completing part of her Naturopathic internship at the Integrative Health as well as at the Brampton Civic Hospital. She is also a Clinical Intern on the Fertility and Reproductive Health Focus shift at CCNM, where she receives additional training in complimentary fertility care.

Farah has a special interest in endocrinology and hormone balance, digestive health, and skin care. She understands how each system influences the other, and is passionate about identifying the root cause of health concerns.